Even if they don’t manage to push the envelope with their trap/EDM mashup, ‘U Make IT Rock‘, maybe that’s not such a bad thing; ICEY Clique and company seem more interested in making music that’s going to reach a wide audience rather than being known for innovative strides in the world of pop music. With that said, they still seem to lack a few of the ingredients necessary for the success they seem to be aiming for. 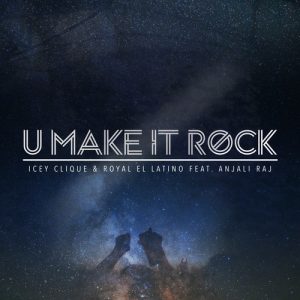 ICEY Clique are a three-piece hip-hop group from Australia. Comprised of members Khanage and Zah4Real, they’ve been working together since the early 2000’s and have managed to develop a small following over the course of their prolific history. Their main focus is on making electronic pop music with a positive message, and – even though hip-hop is a constant theme throughout – they do manage to incorporate a few different genres into their work.

Their latest single, ‘U Make It Rock’, features Royal El Latino, as well as singer Anjali Raj, and starts with a somewhat typical trap sequence followed by some fairly generic rapping. It’s not the kind of thing you wouldn’t hear on popular radio, but it still feels fairly uninspired. Rhetoric about the difficulty of attaining your goals, refusing to be defeated, and eventually breaking through those obstacles are definitely well-intentioned, but come across as unconvincing filler.

The hook of the track, which is sung by Anjali Raj, definitely sounds good and features more of the same message. The songwriting ability is obviously there, but there’s nothing that’s going to catch people off-guard and cause them to remember this track. The professional approach here is definitely impressive, but the lack of heart or vision means that it lacks the attributes artists need to gain traction within the indistry.

The song then descends into a typical EDM/party anthem beat, and the production values here are especially good. The transition into the second (and somewhat more impressive) verse is great, too. The rest of the track cycles between the kind of snare-drum abuse and pitch-shifted vocals we’ve all come to expect from the trap music. The video is especially entertaining, with what appears to be around 25 people dancing in a car park (their enthusiasm has to be admired, though).

My main issue with productions like this is that the artists involved seem to be more interested in making a name for themselves rather than making great party music. A solid work ethic is one thing, but they’re never going to get where they need to be if they don’t either find someone with pull in the industry to back them, or find an element of surprise to add to their music.

It’s hard to doubt their determination, though. The music video appears to have been shot on an iPhone, and the beats were probably produced with free software; that said, they’ve still honed their craft and clearly understand the importance of production values and the fundamentals of strong EDM songs. I hope that they manage to do something a little more unique in the future, as well as develop their songwriting ability, even if it is just for the sake of attaining the success that they obviously desire.