Eco Virtual is an anonymous vaporwave artist who also happens to be producing some of the most forward-thinking material the genre has yet seen. Her* ‘Atmospheres‘ series of releases comprises several short-form albums consisting of between 9 or 10 tracks, each of which tend to last no more than three minutes. 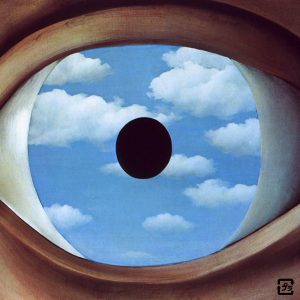 While there are currently four Atmospheres releases (each of which are titled eponymously and numbered in the order of their release), today we’re going to be taking a look at Atmospheres 2. This is the first of Eco Virtual’s albums that I personally discovered, and – to this day – it remains my favourite, if for no other reason than providing a broader overview of the possibilities of Vaporwave than I previously had before.

The album opens with the airy pads of ‘Sunrise at Googleplex’, which features some nice sampling. The chopped-up vocals during the second part of the track instantly set Eco Virtual apart from many of her peers, who – for better or worse – tend to make vaporwave music which samples several bars from well-known songs and then repeat that for several minutes. Upon listening to the track, I was immediately struck by the obvious compositional knowledge of the artist and felt as if I was hearing a “new” vaporwave track for the first time (as opposed to a slowed-down remix of an old tune). There’s also a significant amount of variation throughout the track, which also tends to be a rarity in this still-evolving genre.

Another touch I really like throughout the record is the inclusion of programmed drums; even though there are much heavier and complex drum sequences on tracks like ‘Clear Skies Through The Mall Skylight’ and ‘Eden’, the vast majority of the record tends to focus on a more subtle 808-style kit. There’s a collage of old-school sounding kicks, snares, and hi hats – as well as rimshots and cowbells – and the hip-hop sensibilities of the artist manage to fill out a lot of the tracks rather than detract from them.

‘Fiji Waterfalls’ and ‘Aloe Vera Water’ provide further contrast, using a blend of looped found sounds such as waterfall and birdsong. Even though this is a fairly simple addition, I really liked the fact that the birdsong in the latter track evolved into a morphed and purposely clipped sequence, and the pitch-shifted samples made me think about the days from my childhood I used to spend inside playing Sim City 2000.

There’s no filler or weak songs on Atmospheres 2. Every track has obviously been put together with a lot of care and, accordingly, there’s enough minute differences happening throughout the tracks to warrant coming back to the record for further listening. The artist’s affinity for blending organic flutes and pitch-shifted samples with drums which manage to straddle multiple genres (including trip-hop, trap, and her vaporwave contemporaries) mean that she sometimes sounds like the birthchild of Clams Casino and Oneohtrix Point Never. Even the layered and evolving drum sequences of ‘Clear Skies’ sound like they were inspired by Music Has The Right To Children by Boards of Canada, so there’s definitely an apparent – though well implemented – influence from genres outside the conventional sample pool.

At the beginning of this year, I found myself at a point where the novelty of vaporwave was already starting to wear off before I discovered Atmospheres 2. The scene gained a kind of infamy online for its use of lazy sampling, but the conjured images of kitsch nineties culture managed to keep many individuals interested. Now, it’s starting to evolve, thanks to artists like this.

That said, there is some contradiction on the record. The seventh track, ‘Noctilucent’, is fairly standard vaporwave faire, relying almost completely on downtuned samples of Opus No. 1 by Tim Carleton and Darrick Deel. Even though it’s a perfectly enjoyable listen, it does bring to light an inherent problem with tracks composed in the same manner: there just isn’t a whole lot to talk about.

However, the record soon recovers its originality with ‘Eden’, which is a much-more upbeat track, and somewhat derivative of 90s house thanks to its clipped loops and energetic drumming. The closing track, ‘Silicon Valley Wind’, presents a tremendously enjoyable stroll through an array of sporadic drumming, pitch-shifted pianos and saxophones, and some more overt chopped-up samples. It’s the perfect way to finish the experience of listening to the album.

Overall, I can’t really recommend checking out this record enough. There’s enough vaporwave mixes on YouTube to keep you occupied for weeks; the only problem is that you’ll probably be bored out of your skull by the end of it. Save yourself the trouble and pick up Atmospheres 2 for a buck on Bandcamp (all of the Eco Virtual releases are priced similarly) and enjoy listening to what – even if it isn’t the future of popular music – will almost certainly be an enjoyable detour for many fans of electronica.

* For the purposes of this review, I’ve assumed the artist is a woman in order to make writing about the record easier.