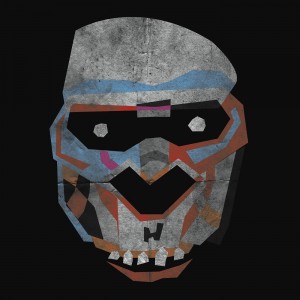 This next review comes via the epic soundscape that is Ebola Ape’s Dance in Haze, out in all major shops on February 1st, 2014. Ebola Ape is an emerging Polish producer of “eery, nocturnal atmospheres”. He describes his work as “Music of the night. Reverbed emotions of solitude.” Original productions, using analog synths and original vocal samples.

This album is heavy, goes hard in the paint with some seriously deep, massive, gooey soundscapes. Almost immediately upon cranking my WinAmp up a notch, a heavy cloud of ambiance, trap beat, choral vocals and jungle animal sounds fills my head, in the form of the opening track, Lombok,  instantly relaxing me. What an opening. Boom! This is Dance in Haze.

Lighthood is as deep as they come on this album, with dark organ sounds accentuated by reverberated female vocals and a tightly wrapped trap beat. This is the music of 2014, stuff I haven’t heard before. There is some Enya-like influence in there – a mysterious vibe.

Honest is a hard-hitting spoken word/rap/trap style track with some slick and sick vocal fx, meticulously and accurately laid out. The vocals shine through the deep atmosphere and come across as clean and crisp as it gets. Back to Uluwatu is another, similar vocal rap track – truly a unique production.

Sigh is one of my favorite tracks on the album, because not only does it use all of the elements described before, but it also introduces a melancholy melody which shines a dim light on the overall heavy production. Irian is another, similar track that really stands out, melodically.

Whatever you’re into, this slow-paced – worldly- album is one you at least want to hear once, but as for me – I’ll just be over here playing it again. This is music licensing gold, so don’t be surprised if you hear this in a film or show in the foreseeable future.

Dance in Haze on Bandcamp:
http://ebolaape.bandcamp.com/album/dance-in-haze

More information about Ebola Ape and his label:
http://astralritual.net/
http://ebolaape.com/